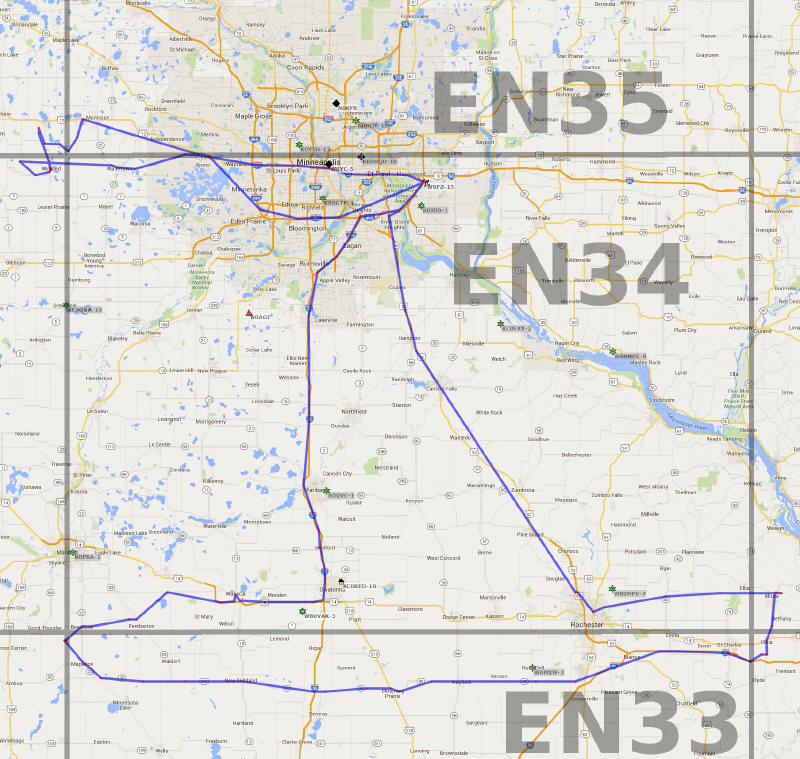 All summer, Janice and I were looking forward to the September VHF Contest. The only problem was when to troubleshoot 902, 1296 and 2304 gear that was acting up in the January contest? This was a very busy summer and no progress was made on the equipment. With the contest approaching, we decided to use back-up equipment (radios and antennas) and not go get the roof rack of antennas at the farm. Additionally, due to some other schedule constraints right before and after the contest, we decided to stay somewhat close to home with our roving locations.

You can see on the map to the left our Saturday jaunt from Woodbury westward to the Howard Lake (Dog Lake) corner. We returned to Woodbury to sleep. Sunday morning, we headed southwest for the Beauford corner. During the afternnon we headed east to the St Charles corner. After the contest was over we drove to Rochester and then northward to home. We got home about 1am. Now that we are married, we get to use the "Family Rule" and give out two contacts using the same set of equipment. 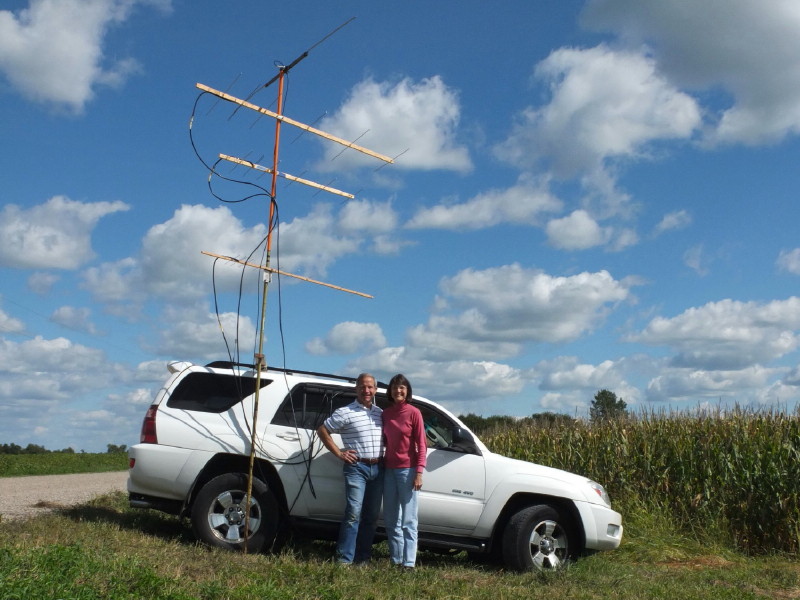 What's great about this location is that EN35 is on the other side of the road. So you don't have to move the car very far to be in the next grid. We used back-up or spare gear for this contest. Normally we have a table of 5 radios that cover 7 bands. But that means 5 microphones and 5 amplifiers to switch on. For this contest, we used a Yeasu FT-897 for 6m, 2m, and 432. We drove amplifiers on 2m and 432. This rig has a Downeast Microwave 222 Transverter in the battery bay per an article by Jon Platt W0ZQ. That article is in a proceedings of the Central State VHF Society (2008 p25). We intended to drive a brick with that transverter but the amplifier kept kicking out with "high SWR". With no time/means to remedy that, we went barefoot with 6 watts on 222 MHz. 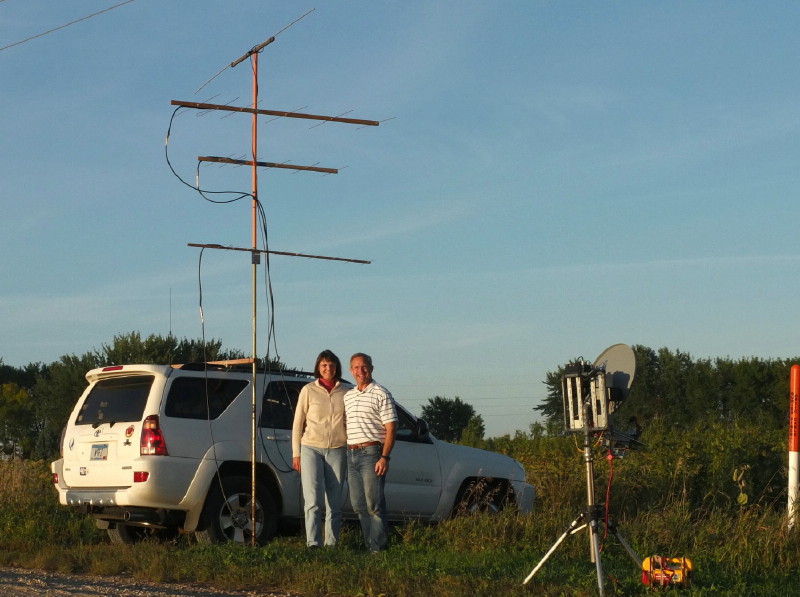 This is about 1 mile southwest of the town of Howard Lake at a cellphone tower site. You can see Janice working W0GHZ on 10 GHz. The soybeans glowed in the setting sun. In the last picture you can see a fog layer starting to form in the still air. After this grid, we went to Winstead and had fine Broasted Chicken at V's Grill. After the sit-down dinner, we worked our way to EN24 and operated for a few hours in the dark. 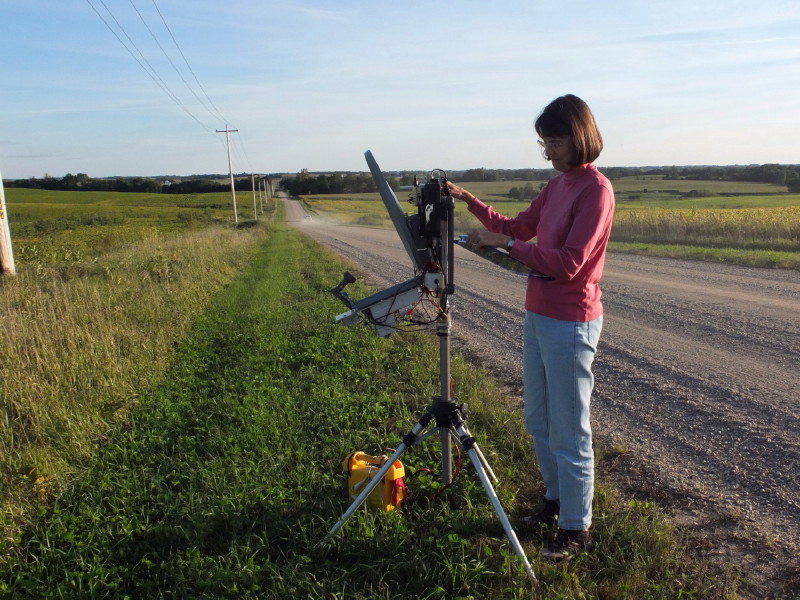 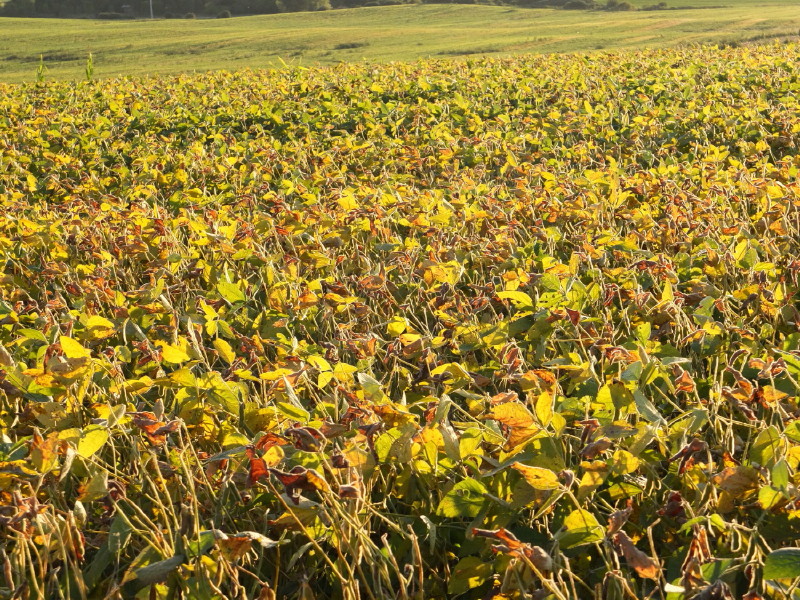 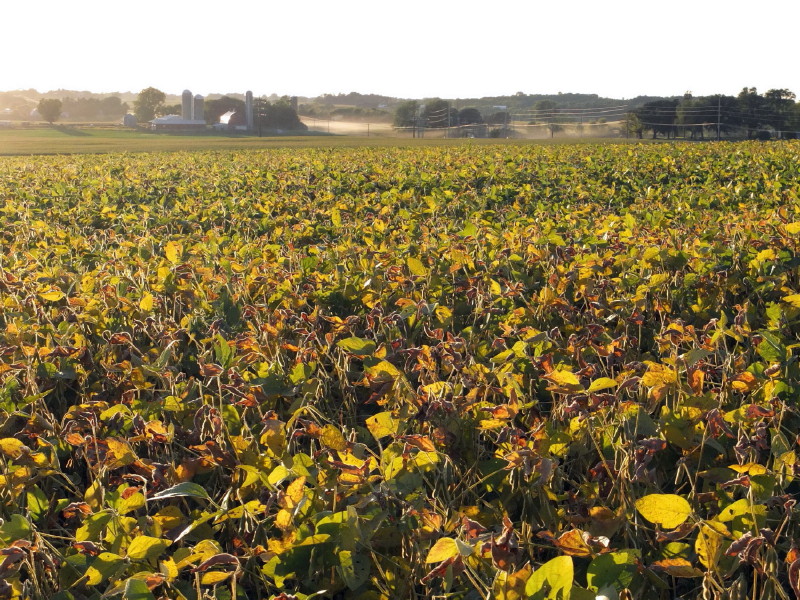 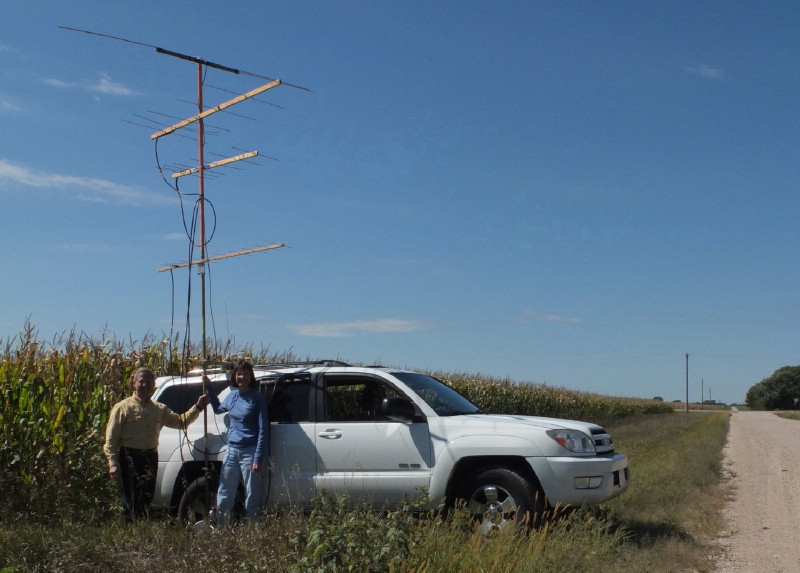 It took 2.5 hours to drive from Woodbury to the grid corner. Normally when at that grid corner, we activate all four grids. But since we had activated two of them the day before, we only activated EN23. We saved activating EN33 until we were in the other (northeast) corner of that grid. We do most of our operating and logging from the backseat. I hop out and point the beam and then hop back into the driver seat. Janice hands me the mike when it's my turn to make a contact. You can see Janice making a CW (morse code) contact with a station who was pretty far away. 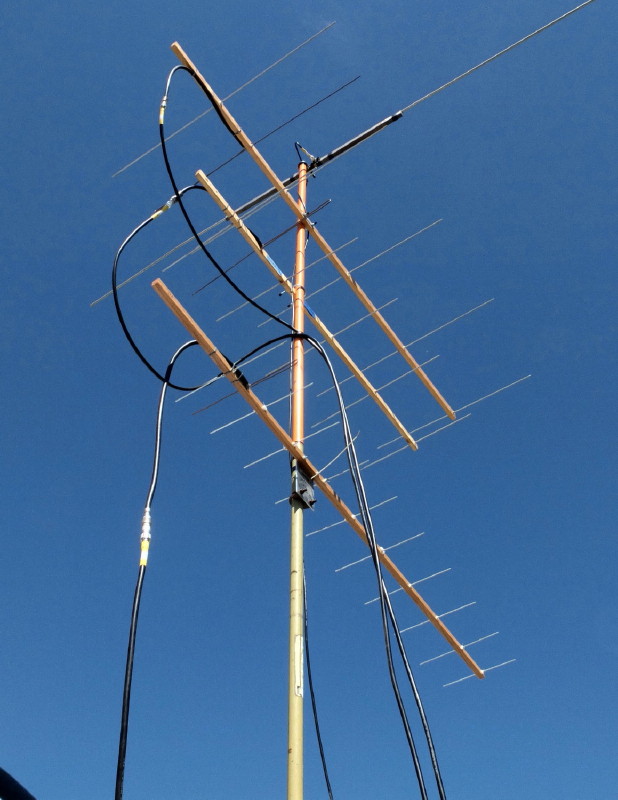 Normally we use a PVC (Schedule 80) rack to hold all the beam antennas. The plus with that method is that the antennas are always up (except 6m). But that rack lives at the family farm 180 miles away. I've built "VJB" "Cheap Yagis" over the years and had them in the garage in Woodbury. This contest was the time to put them to use. VJB Cheap Yagis are great because they are reproducible and work! I designed the 432 beam for end mounting but modified it for mast mounting for this contest. On 6 meters, we used a dipole at the top of the stack. Below that is 6 elements on 2 meters. Then lower is 6 elements on 222. At the bottom is 11 elements on 432. I took the top three antennas and slid them next to each other at one end of a 5 foot mast chunk. That tipped on its side with the elements vertical along the side of the roof and tied down to the roofrack during transit. At each stop, we detached that chunk from the roofrack and added two more mast sections underneath that. We fed the mast through a 2x4, with a big hole in it, that was lashed to the roofrack. That gave us the stability while the mast was vertical. We had to tighten the u-bolts and run the coaxes at each stop. Having a rotatable array was nice so that we didn't have to turn the car to peak up a station. One of us just had to hop out and "armstrong" rotate the mast for signal peaking. 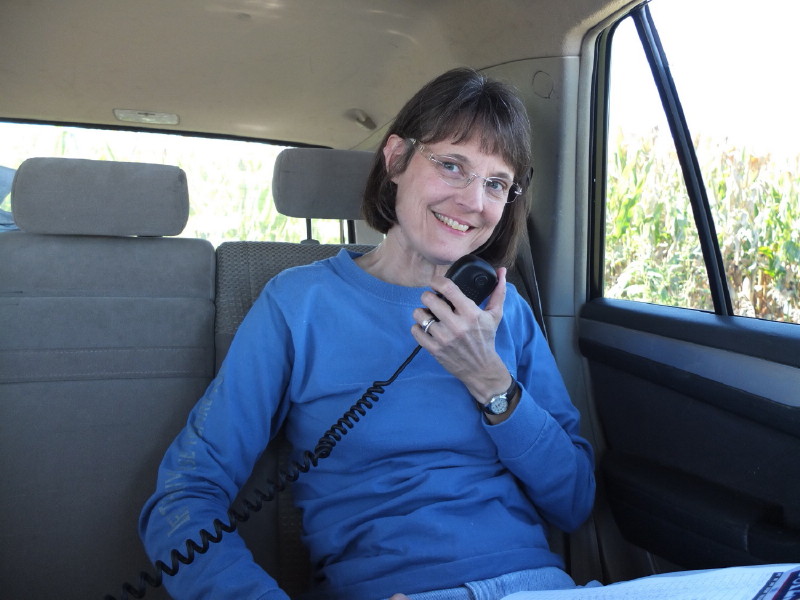 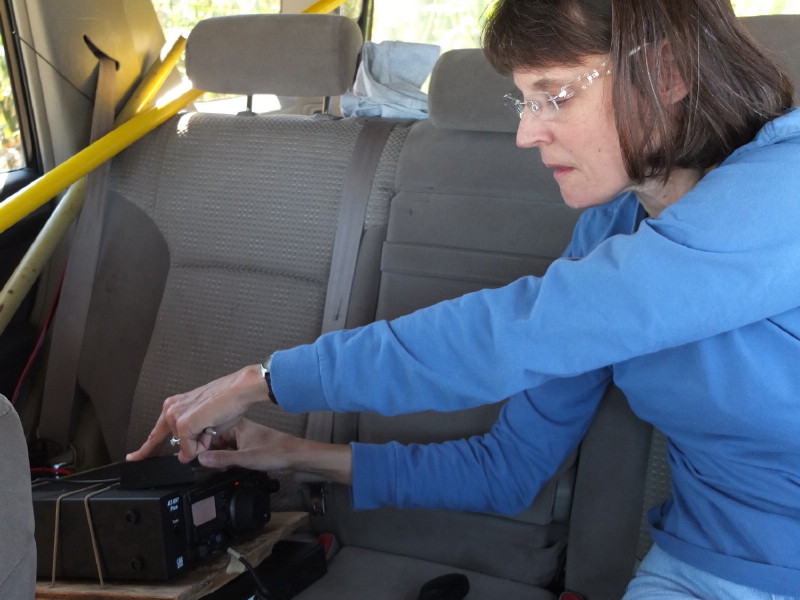 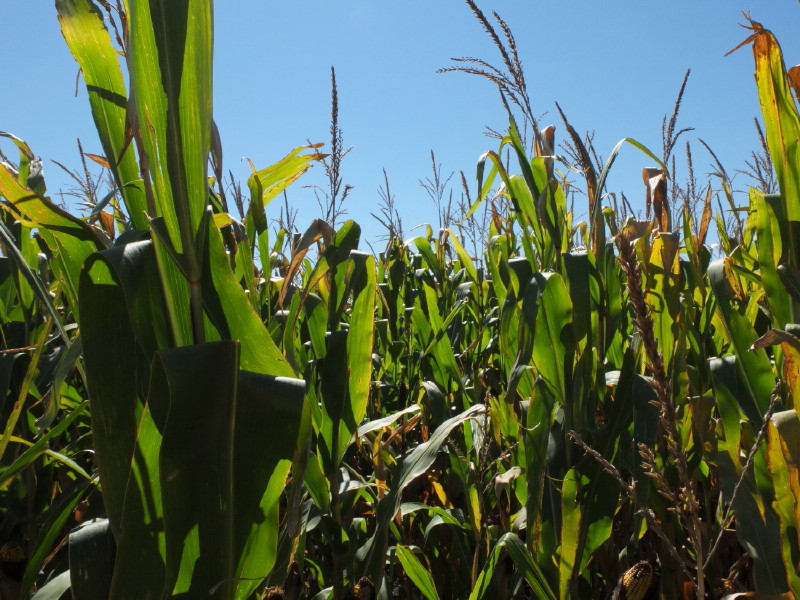 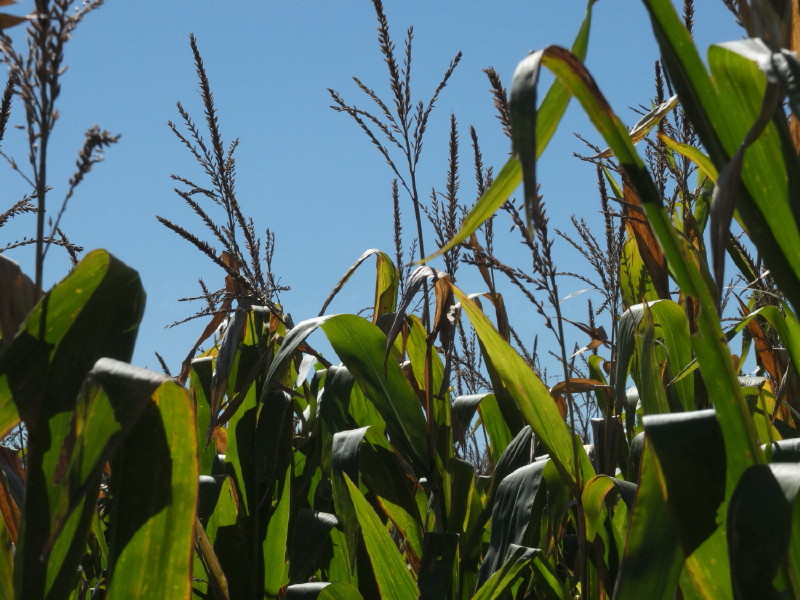 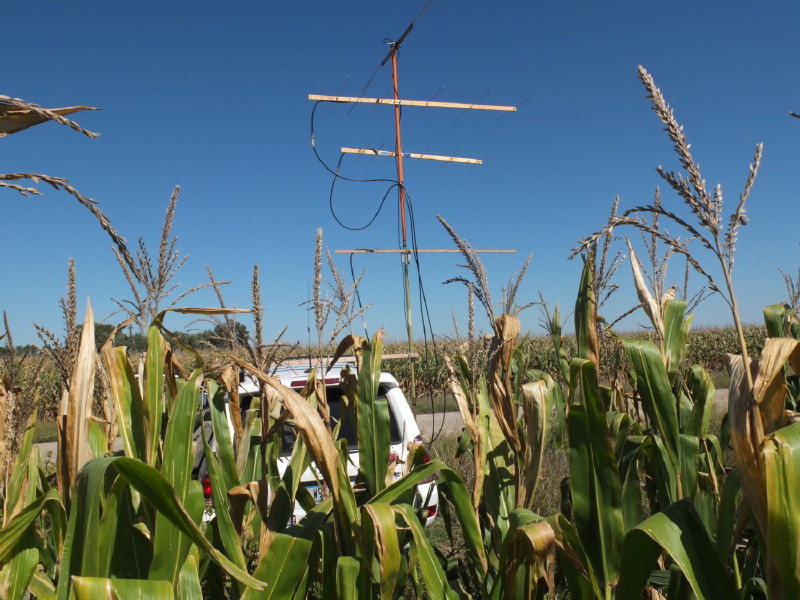 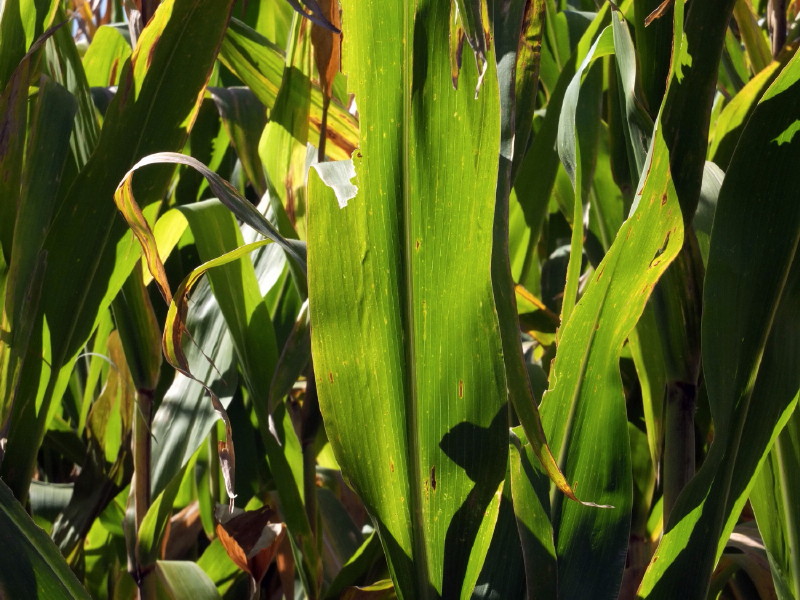 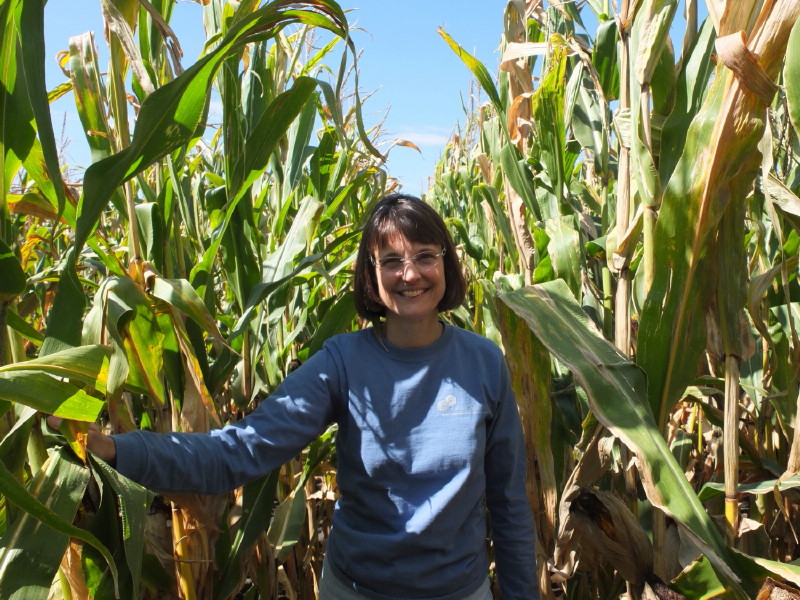 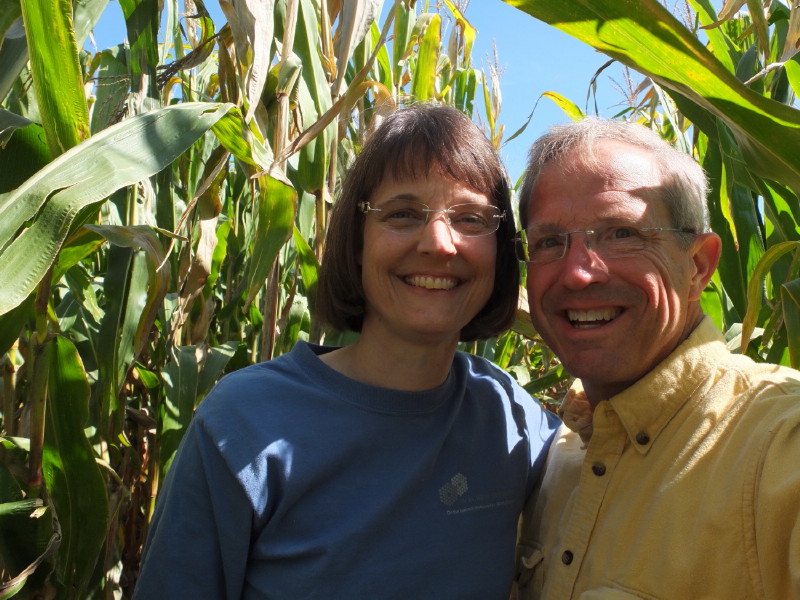 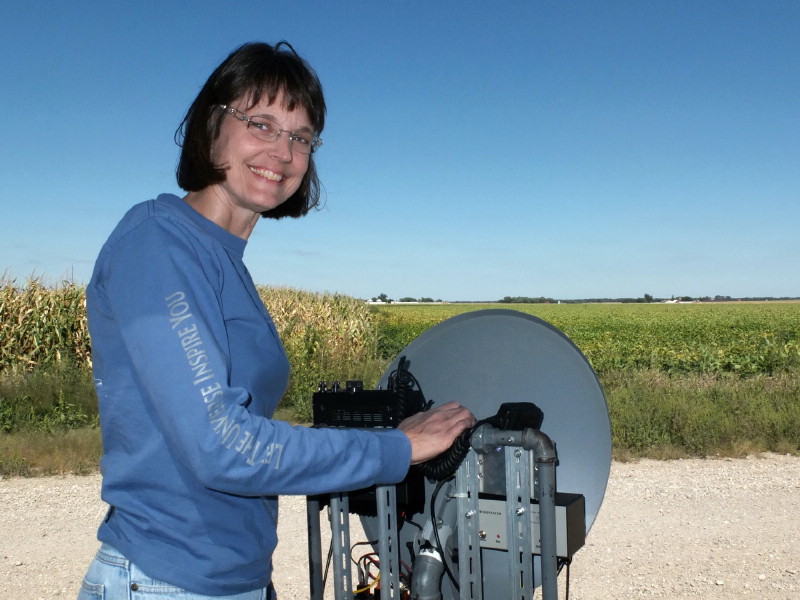 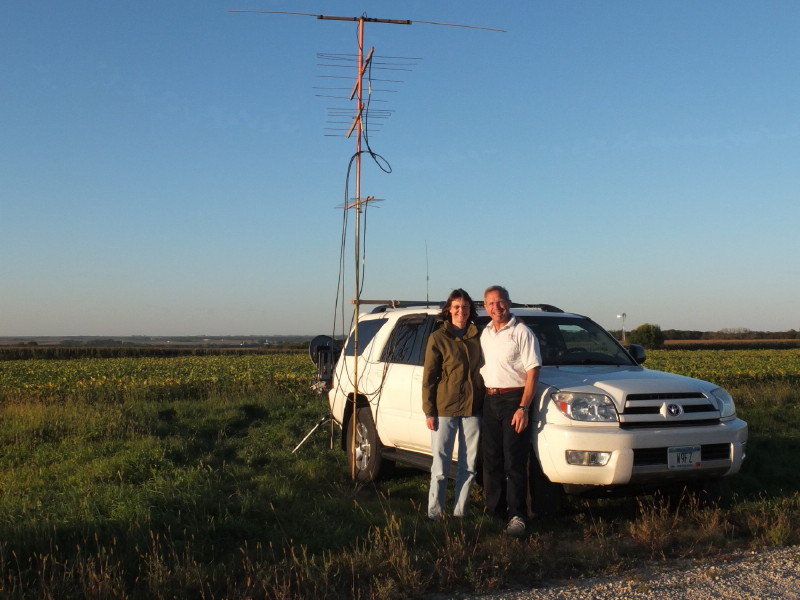 The beams are pointing at Eau Claire and W0UC, K9MU, N9ISN and N0AKC. Putting up the masting and attaching the antennas was a hassle. We only needed to move about 100 yards to the next grid. I lifted the mast a few inches and walked alongside the car while Janice drove slowly to EN43. I've never done that before but it was the best choice in this case.

Here's the required "sunset" shot. The antennas are pointed at LaCrosse and Milwaukee. We worked W9HQ, W9GA, and WB9TFH on this heading from here. We both were getting a little tired at the end of this grid. We were behind schedule and our planned schedule still had us going to EN44. However, for this grid (EN43), the QSOs started drying up. So we took down in the dark, drove the 15 miles to the Altura corner and erected the antennas there in the dark. We got on the air with 38 minutes to go. The point was not to work new grids but to give QSO volume to all the operators who had been following us around. Over the two days, all the operators knew the drill: 2m, then 222.140, then 432.140, then finish on 50.190. In quick succession W0GHZ, K0SIX, KA0RYT were worked on the heading to the Twin Cities. On the Eau Claire heading: W0UC, N9ISN, and K9MU. With the new rules, we were able to schedule with K2DRH and W9HQ to spin their ways. With minutes to go we even got our good friend W9GA in the log. In the last minute, we worked W0GHZ on 10 GHz. That's 32 QSOs for each of us in 38 minutes. That's a NICE rate including band changes and heading changes!
The score above is for Janice KA9VVQ/R. W9FZ/R score is 17343 because I missed working W0ZF on 6m.
See you in January 2016 for the VHF contest! Bruce W9FZ and Janice KA9VVQ