Last year Janice and I had such a good time in the 2013 MNQP mobiling in the 8 SE-most counties. Chatting with Jon W0ZQ, we learned that he intends to activate all 87 counties and is over halfway there. That idea appeals to us. 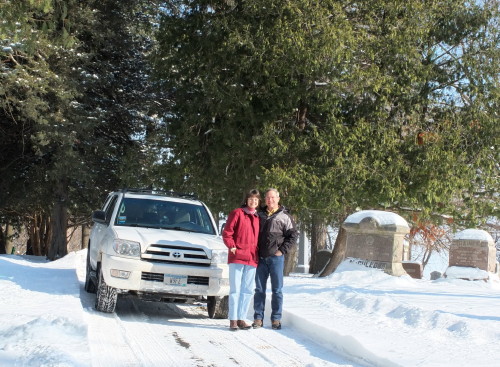 In the picture on the left we are in Rice county. We operated from a cemetery on the NE side of Northfield, MN.

Since last year's MNQP, Janice and I have roved in 6 grids for CQ-VHF, 7 grids for January VHF (just a few weeks ago), and 8 counties in the Iowa QSO Party last October. In addition, we've done several HF contests and QSO Parties from the cabin in Hillsboro, WI. So it's been a great year of ham radio contesting. We like the way that contesting gives us a big dose of "ham radio" all in one weekend. That works into our busy lives and living 200 miles apart (for now :-) ).

So we knew we were going to pick new counties--but which ones. Well, work demands dictated that we needed to start and end within a reasonable drive of Woodbury, MN. We use DeLorme map books for our planning. First, we look at the county line areas. I also call up RadioMobile terrain data. Unlike VHF, we don't need the absolute highest spots. But I just don't have the heart to sit down in a valley. Being in a car, we need the best radiation pattern possible--so we look for higher spots. We like to pick two spots (two counties) somewhat close together and then move to two new counties. It lets us get fuel, food, and nature stops during the moves between county pairs. I build a map graphic with our planned route that I can share with the MNQP "mobiles" website.

Unlike many mobiles, we don't operate on the fly. We operate only while stationary. Someday, we hope to deploy bigger antennas while stationary (in compliance with the particular State QSO Party). But turning the radio off while driving gives us a chance to enjoy the scenery and give our ears a rest. We don't mind that our score will be less. We are having a blast just being out there. 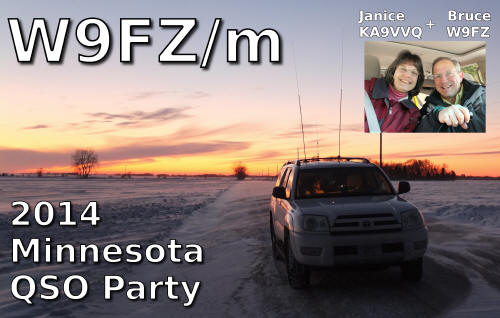 Here is the special QSL card we will send out this year. I make a small "limited edition". I've received only one QSL card inbound so far.

I upload to LOTW. For a mobile, it can be tedious. Stations working us sometimes log us as W9FZ, others as W9FZ/m, and the rest as W9FZ/XXX. Interestingly, I have to have three certificates for signing the ADIF logs: W9FZ, W9FZ/M, and W9FZ/XXX if I want to "match" with all the stations who upload to LOTW. (Actually, I apply for a child certificate for each /XXX county. So it's 2 + #counties activated for certificates.) It's tedious, but I'm just the guy to do that! I break up the big ADIF file into smaller files that I sign from each specific county. I've built "locations" in TQSL that are accurate with grid and county.

I'm not sure if the county award programs use LOTW yet or not. Please know that we will gladly QSL any of our QSO's (and we'll probably send your SASE back to you). 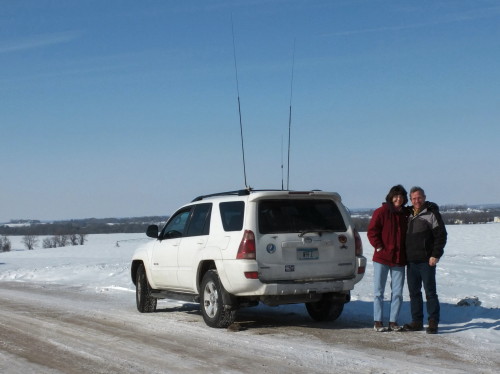 In the picture on the left, we've now moved to Dakota county--right on the southern edge. This year, we moved the FT-897 to a board tipped up just in front of the passenger seat. The passenger's legs pass above and beyond it. It means that when the radio needs to be accessed (tuned), one doesn't need to turn their torso--just peek between their knees and make the adjustment. Certainly, a detachable faceplate radio (like the FT-857) is probably in our future. But for now, the FT-897 works and has the LDG tuner attached to it's side.

We run a short coax underneath the passenger seat to the rear seat foot area. There, we have a two position coax switch. From there, coaxes run back and out the rear hatch to the roof. We have a mag-mount ham stick that we use the most. We bring along ham sticks for 80, 40, 20, and 15. This year we added an MFJ manual screwdriver vertical. It should really help our 40m signal particularly with the better grounding I've given it. But we only used it for two QSO's this time because we were having such fun on 20m. 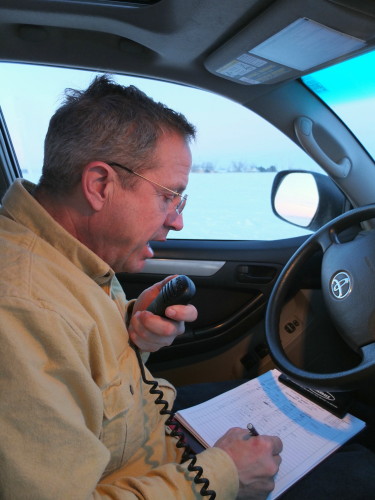 Based on last year's experience, we planned to stay on 20m as much as possible. We planned to make occasional checks of 15m just to see how it was playing. We actually have a bigger and better antenna for 40m this year but our one check of the band proved to be "difficult". There was better sledding on 20m so that's where we went. Big "thank you's" to the out-of-state stations who look for MN stations on 20m. If they weren't there, it wouldn't be as much fun. 40m yielded 2 Q's and 15m yielded 21 Q's. All the rest were on 20m. As a result, we only worked WSH, RIC, LES, and DAK counties in-state. We were pleased with the coverage of states. Nice to get ME, RI, VT, SC, NH, and WY. Missed the following: SD, ND, IA, KS, MO, CT, DE, MS, HI, AK, OR, IL, and WI. Better Canada coverage than most years picking up VE2, VE3, VE5, VE6, VE7 and VE9. 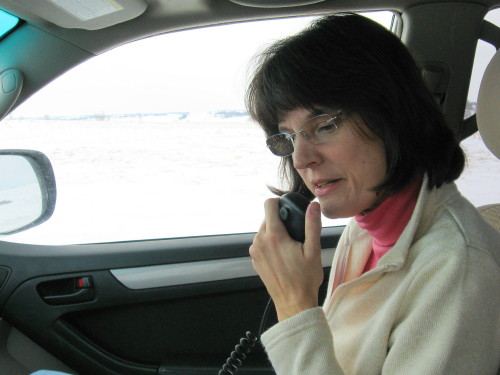 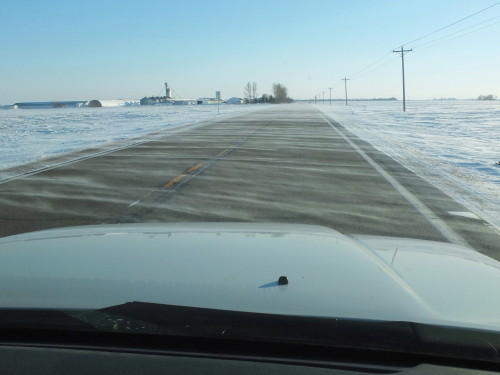 The weather was pleasant--inside the car. The day started out cloudy but by the 3rd county cleared out for a sparkling day. This year temps were around 10 degrees at the start and we saw a high of 19. It was a sunny day which really helped. There was a steady breeze causing some pretty good wind-chill. When I was outside the car changing antennas or taking pictures, it was "brisk". . Most of the time we were able to muscle in on a spot on 20m. We had trouble in Le Sueur county however. It seems that all the fixed stations in MN were on the air at that point and holding down frequencies. I'd be a fan of leaving a "mobile window" on 20m--but it probably will never happen. Because we don't operate on the fly, we give up our freq every time we move. 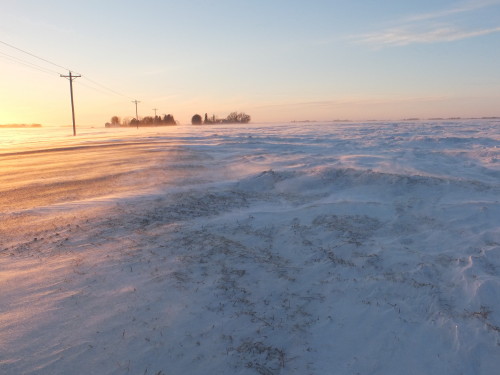 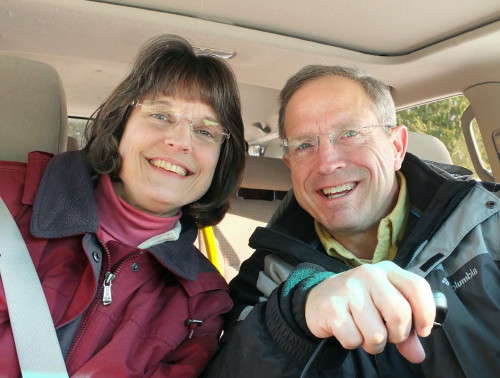 Once again, we had a blast in this event. We appreciate the out-of-state stations getting on the air and working all of the Minnesota Stations. It's Minnesota's day of fun! Janice and I have come to like state QSO parties for the relaxed and festive nature. We worked WI, IL, OH, HI, KS, IN7QPNE, PA, CA, and AZ QSO Parties from the cabin in Hillsboro, WI. Some of those we just "dabbled" in. But we hit WI, IL, and CA pretty hard. Last fall, we mobiled in 8 counties in the IA QSOP and had so much fun, we intend to do that again. And of course, Minnesota QSO Party will be a regular for us. Like W0ZQ, we intend to activate all 87 counties eventually. 16 down, 71 to go :-) . It will be a good way to enjoy learning about the entire state. If you would like a QSL card, just let me know. See you in just under a year! Bruce W9FZ and Janice KA9VVQ 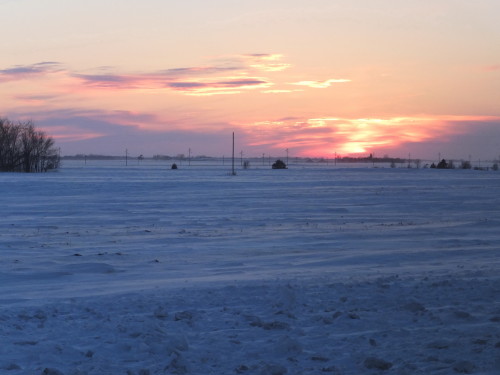