In 2010, 2011, and 2012 I activated 8 counties in far Southeastern Minnesota for the Minnesota QSO Party (MNQP). Each year, I've enjoyed the drive and my number of contacts and total score has slowly improved.

During the past year I had a big change to my life--I now have a girlfriend! She is Janice, KA9VVQ. We have many shared interests outside of ham radio. But ham radio is certainly a shared interest. In mid-January, we combined forces and did a 7-grid rove in Eastern Wisconsin for the January VHF Contest. Janice was somewhat new to VHF/UHF weak-signal work. She juggled five radios and their amplifiers and quickly got the hang of things. Based on the fun and success of that trip, we looked at taking part in the 2013 Minnesota QSO Party together.

I planned for us to repeat the same 8 counties on the same schedule as in the past few years. I think it's a lovely drive through SE Minnesota and fixed stations appreciate the extra activity or multipliers. 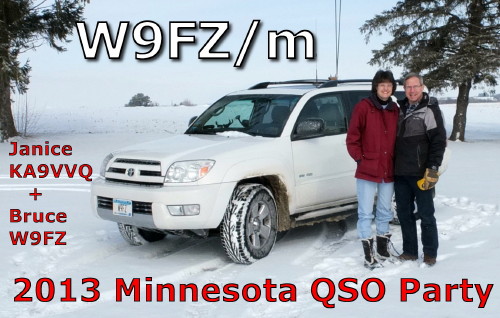 Here is the special QSL card we will send out this year. I make a small "limited edition". I've received two QSL cards inbound so far. 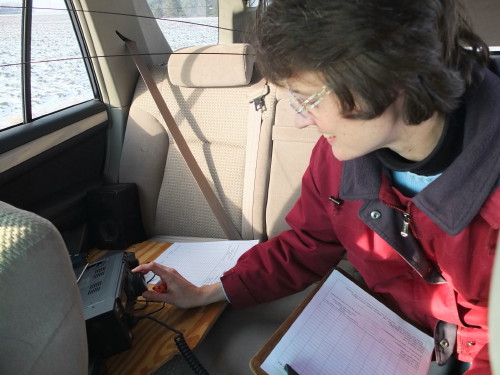 We set up a Yeasu FT-897 in the right rear seat of the Toyota 4-runner. The operator would sit behind the driver seat and turn sideways to operate the radio. We used "hamsticks" for antennas. Because sitting in the backseat has poor visibility and makes observing the beautiful countryside difficult, we chose to NOT operate while moving. We found our operating locations and then moved an operator to the back seat to operate. The other operator logged and did other little support tasks.

We started our day over in Hillsboro, WI which is about 90 minutes in good conditions from where I like to start in WIN. The roads were a little sporty in SW Wisconsin that morning and it took about 2 hours to make the drive. Plus, we got a late start leaving the farm in Hillsboro. As a result, our first Q was at 1507Z from WIN. 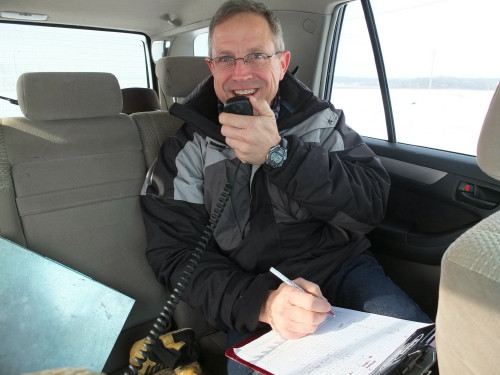 We started on 20 meters and had amazingly good luck there. We checked 40m a few times and found it VERY tough sledding. Stations wouldn't hear us despite their strong signals to us. I need to improve the ground on the antenna and graduate to something bigger (or more efficient) than a hamstick. So we made 4 Q's on 40 meters and didn't work very many MN counties this year. We tried 15 meters a few times and found activity very light. Conditions seemed ok--just not many operators up that high this year. We made 7 Q's on 15 Meters. 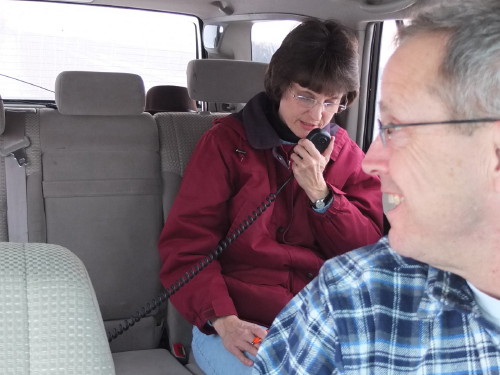 We only worked WIN, STL, SHE, DOD, and OLM for MN counties. We worked 3 Canadian Provinces and 33 US States. We worked one XE2 for our only DX. The surprise state was SD on 20 meters. I think that is pretty short skip. 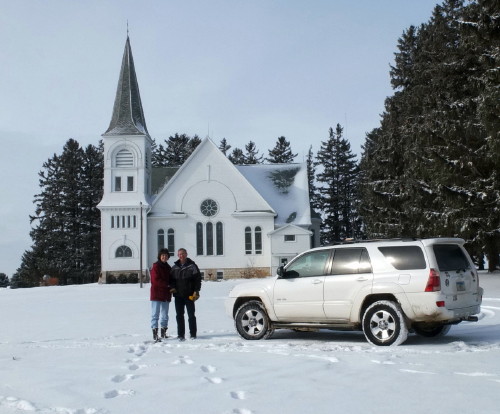 The weather was pleasant. We found we could CQ on 20 meters from some of our stops. At a few stops, we really couldn't find any place to CQ and only made a few QSO's before moving on to the next county. Q's per county: 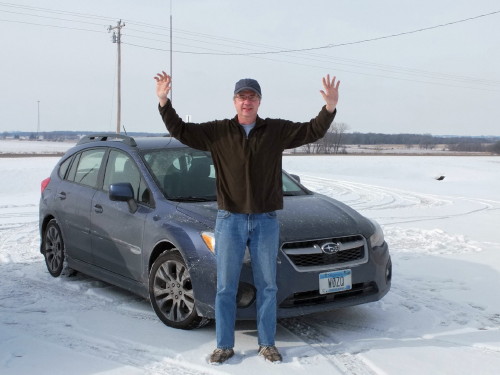 We heard W0ZQ/m CQ'ing on 20m. He must be very close. We dropped our call in and he heard us and responded with "Dodge". As we finished that Q, he moved into "Olmsted" yielding another QSO. He said he was on Hwy 30 eastbound. We told him we were parked just off the road and at which cross street in an old schoolhouse parking lot. Jon stopped by and met Janice and we gave quick "shack tours" of our respective vehicles. We snapped a picture or two and Jon was back on his way. 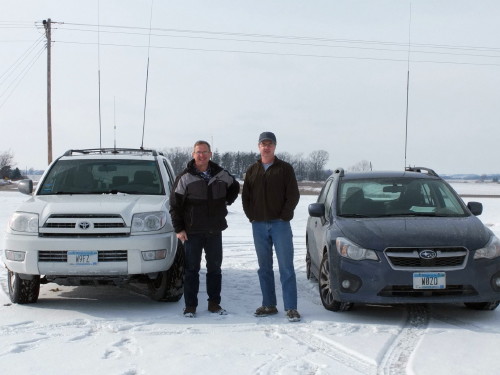 This picture is eeriely similar to a picture from a January VHF contest sometime between 1991 and 1994 where W0ZQ, N0HJZ, and I have our cars lined up at the Dog Lake gridcorner west of the Twin Cities. Doesn't seem like 20 years ago. What? We've gone from VHF/UHF back down to HF? Who'd have ever guessed that??? 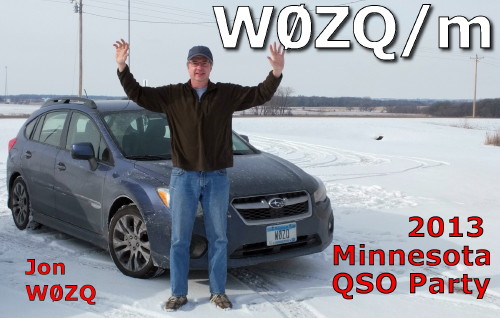 Jon activated 11 counties this year and over the years has activated 48 of Minnesota's 87 counties--just 39 to go!
We had a good time in this year's event. We will take part again next year. We are already discussing changes to station layout in the car and antennas to help our ability to make Q's. I REALLY enjoyed having Janice with me on this jaunt and this year's event was the most fun I've had yet because I could share it with someone. If you would like a QSL card, just let me know. See you in just under a year! Bruce W9FZ and Janice KA9VVQ